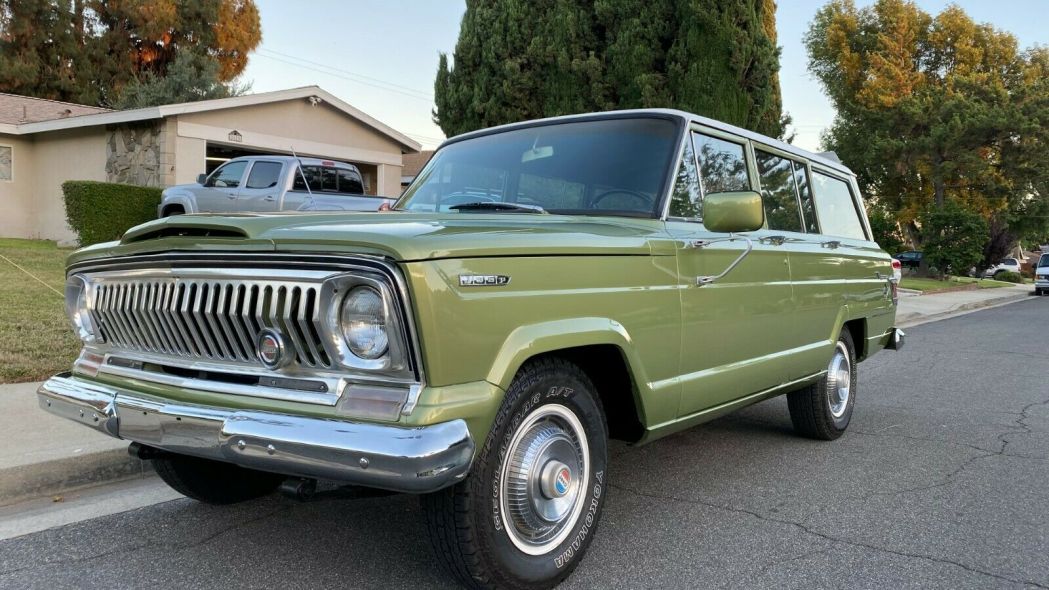 Before it morphed into the wood-sided Jeep Grand Wagoneer and became an SUV icon, Jeep's just-plain Wagoneer had already established itself as a pioneer in the field. The Wagoneer combined a car-like driving demeanor with genuine off-road capability, setting the template for the modern SUV. The vehicle made its debut for the '63 model year, and this restored 1968 Wagoneer, for sale right now on eBay Motors, looks to be an excellent example of the breed.

This Jeep is freshly repainted with a period-appropriate olive green. Encouragingly, the body looks pretty straight in the pictures and the seller's video. We're digging the white roof and the white steel wheels under factory wheel covers, although the outside mirror should be chrome rather than body color. Powering this Jeep is a straight-six, said to be rebuilt, paired with a three-speed manual with a floor shifter rather than its original column shifter. The part-time 4WD system has its own shift lever alongside.

The seats are reupholstered in black vinyl with a matching headliner. The early-style dashboard has a neat half-moon-shaped speedometer and bright metal inserts. The carpet appears new, and the door panels look like they may be later units—extra points for retaining the factory steering wheel, which seems to be in excellent shape. The tailgate window is crank-operated, which is a bonus given how problematic the rear power window is in this model.

Compared to a Grand Wagoneer, these earlier models are mechanically more straightforward and have a classic '60s style all their own.

At this writing, bidding is up to $12,000 with the reserve not yet met and four days to go.