You are using an out of date browser. It may not display this or other websites correctly.
You should upgrade or use an alternative browser.
Forums New posts

The 2018 Jeep Wrangler has been at the center of the automotive world's attention for some time now as it is getting an all-new redesign and updated components, making it an all-new Jeep when compared to the 2016 JK Wrangler. One of the largest changes is the switch to aluminum body panels for the '18 Wrangler, which will shave weight while remaining rugged and strong for the trail. Swapping out the steel body panels of the JK for aluminum ones will boost fuel efficiency considerably while also making the new Wrangler lighter and more nimble on the trail. But that's not the only big change Jeep has planned; check out what's different between the 2016 & 2018 Wrangler in the image above and read about the changes below!

The outgoing JK Wrangler utilized a Dana 44 for many years, but it appears that they are changing things up with an entirely new axle assembly. There has been some speculation that the new axle is actually a lighter version of the existing Dana 44, just re-engineered to save weight and subsequently increase fuel efficiency. Although the unrecognizable differential shape has raised a few eyebrows amongst Jeepers, one can have peace of mind knowing that the axles have always been a key feature of the Jeep Wrangler — something that will be no different in 2018. 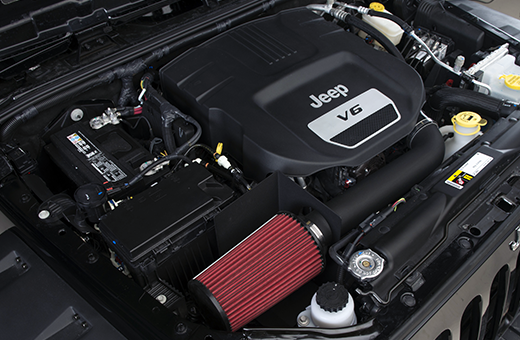 The 3.6L Pentastar V6 engine has worked as the heart powering the Jeep Wrangler for years and it looks like it will continue to power the 2018 Wrangler; no word yet if it will receive a power bump or continue producing 285 HP & 260 TQ. However, the ’18 Jeep Wrangler will have some other options to choose from including a 300 HP turbo 4-cylinder called the "Hurricane" and a diesel engine. A long requested power plant, a diesel engine would be perfect for off-roading with its low-end torque and a 4-cylinder would be ideal for the more fuel-focused enthusiasts; pictures of the Hurricane engine have already surfaced online. When it comes to the 2018 Jeep Wrangler engine, it appears there will be options for every type of Jeeper. 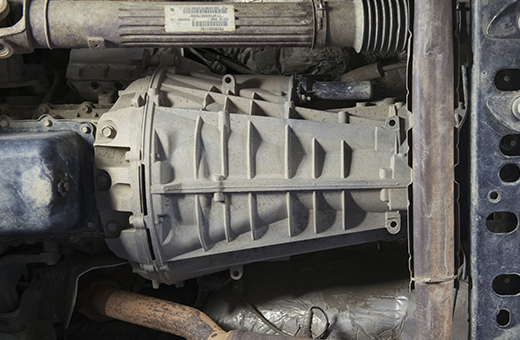 For 2016 you could get a Wrangler with either a 6-speed manual or a 5-speed automatic transmission, but things are changing for 2018. While there was early speculation and rumors that there would be no manual transmission for the 2018 JL Wrangler that were fueled by FCA asking customers how they would feel about not having a manual option, we now know there will be a manual transmission in the '18 Jeep Wrangler. Jeep has been promoting their new 8-speed ZF-sourced automatic transmission, which looks like it will be offered with every engine and trim option for the new JL Wrangler. The extra gearing should help improve the next-generation Wrangler’s fuel mileage, while still retaining its off-road prowess. 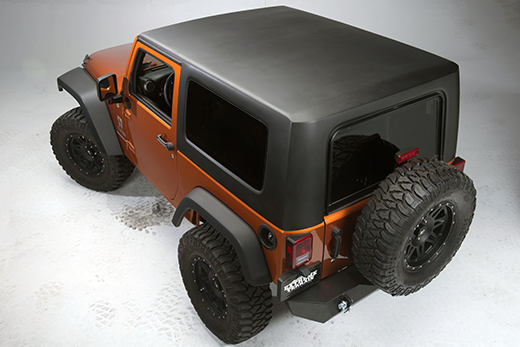 A design highlight amongst Jeepers has been the Wrangler’s soft top design that has been a key feature of from the early days of Jeeps up to the outgoing JK. For 2018, it appears that the new Wrangler is going to be receiving some design changes in an effort to improve chassis rigidity and stiffness. There have been strong rumors of three different top options being available for the JL Wrangler, such as a glass top, power soft top, and true 3-piece hardtop The 2018 Jeep Wrangler will reportedly have a modular top that can be removed in sections, allowing you to still open up your rig to the world. 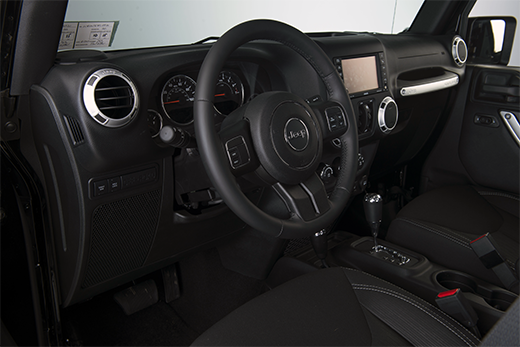 The 2016 JK Wrangler had the most refined yet rugged interior of any Wrangler to date and it appears that they are going to continue the interior for the 2018 Wrangler. Although details have been sparse, it looks like the next-gen Wrangler will offer increased leg room as well as a generally more spacious cabin. While it has been confirmed that the new Wrangler will have a fixed windshield, unlike the JK's removable one, there has been no comment if the doors will be removable.

One of the biggest changes coming to the Jeep lineup is the addition and reintroduction of a Jeep Pickup Truck. Borrowing design cues from previous Jeep Trucks, the 2019 Jeep Pickup will be an off-road focused truck, with the Wrangler’s DNA powering it. Featuring the classic lettering style and looks, the new Jeep Pickup looks to offer a mix of utility and play that will be sure to garner the interest of Jeep and Truck enthusiasts alike. We have already seen some spy images of the 2019 Jeep Wrangler Pickup Truck testing off-road, only making us more excited for what is to come!

Chrysler is not standing still in terms of keeping up with the Joneses. The company is moving forward with the popular automobile industry trends of stronger, lighter, and better. Although the frame is being boxed by adding a fourth side to the traditional C-channel design, weight savings are coming with the replacement of steel body panels by lighter aluminum ones. No specific panels were mentioned, however, indicates it will be “a healthy dose”. Other noticeable changes are in the drive train as the traditional Dana 44 differential shape has been replaced by an unrecognized new design. Perhaps this is a lighter version of the 44. Speculation is that the axle is still a Dana model although no tags were present to indicate such.

As much as things change, they stay the same. Chrysler recognizes this by keeping the main desires of the Wrangler; body on frame and solid axles. As the world transitions to unibody and independent suspension, the Wrangler maintains its original design. As popular as the Wrangler is (supposedly everyone that is produced is sold) for its utilitarian looks, underneath it still features the same Jeep ruggedness for those who desire more than aesthetics. This has resulted in the popularity of the Rubicon models that enable an even more capable off-road machine straight from the factory. No doubt the new models will also generate a number of follow-on products in that secondary market that is also seeing huge growth.

As evidenced by the Detroit Auto Show introductions and buying trends in general, drivetrain and engine are major selling points. The Wrangler is adapting to in order to keep pace with the competition. Although the engine will most likely remain the Pentastar V-6, the new design is speculated to possess the eight-speed ZF-sourced automatic. The additional speeds will spread the power more evenly and combined with the lighter weight could push the fuel mileage up a notch. More speculation surrounds the engine in terms of a possible diesel option to provide the torque often associated with four wheel drive vehicles that are geared towards low-speed operation such as ‘wheeling as well as highway use.

Upgrades in the looks of the Wrangler will come in the form of an adjusted distribution of body panels as well as some interior improvements. A first look at the 2018 Wrangler shows more length in the panel between the back of the hood and the windshield. This, however, may be a proportionate change only as the wheelbase appears to be the same. Perhaps a stretch of the body was needed to accommodate the eight-speed transmission. Another possibility is the redistribution of proportions may be due to the aluminum body panels.

TOPPING OFF THE NEW WRANGLER

There has been a huge amount of speculation around the roof of the new Wrangler. Multiple reports have pointed to the possibility of a modular hard top, effectively replacing and eliminating the classic Jeep soft top. Looking to give the 2018 Wrangler improved chassis rigidity, it appears as though there will a solid top that can be removed in sections, allowing you to have an open roof while benefiting from an improved and stiffened design. However, this remains one of the most highly debated aspects of the new Wrangler, as the classic soft top has been a key design component for generations.

Interior improvements were speculated to feature upgraded seat covers. Many of the speculation in April 2015 including the rumor for independent suspension have proven to not happen in the later articles from September 2015 and January 2016.

A WRANGLER PICKUP TRUCK FOR 2018

The Wrangler pickup is a concept that was taken from the successful CJ8 Jeep Scrambler. Whereas the Scrambler was a utility-oriented vehicle, the Jeep Wrangler Pickup will focus more on lifestyle. What does that mean? In terms of the latest trends in vehicles, it means the design will be oriented towards play more than work. And who can blame Chrysler for that? With the number of four wheel drive vehicles available today, the company that sought the ultimate name in four wheel drive is maintaining the niche established when the Wrangler returned to round headlights. The new pickup was flashed around in prototype photos with an association to the original Jeep Gladiator full-sized pickup that ran from the 1960’s through the 1980’s. Even the tailgate on the prototype vehicle had the traditional Jeep lettering styled like the old Gladiators. This original design was made in the millions and well ingrained in many a boy who owned Gladiator Tonka trucks. Depending on the attitude of older brothers, the logo may have been ingrained in skin based on how hard the truck was launched. The Wrangler will not inherit the Gladiator name according to the available information. Nor will it combine the Wrangler and Scrambler names either. That’s a good thing for those who remember the Rambler, one of AMC’s ugliest cars.

Regardless of whether rumors are true or not, Jeep will maintain its success with the 2018 Wrangler by keeping with traditional elements while expanding to the long-awaited pickup version. One more Jeep tradition will be maintained. The new Wrangler pickup will be produced alongside the current models in the Toledo, Ohio plant. This will keep an American based success story in America where it has been for decades. Chrysler speculates the Jeep Wrangler pickup will be available in late September of 2018. In other news indicates that entry level prices for the Wrangler will be $25,000 which when considering the demand and ability to retain value, may be a price low enough to appeal to a large number of potential buyers.

Original article from our Sponsor Extreme Terrain: http://www.extremeterrain.com/2018-jeep-wrangler-parts.html
Toggle signature
“If one day, the speed kills me, do not cry because I was smiling.”

We starting a new thread on the 2018 Wrangler JL.
Toggle signature
“If one day, the speed kills me, do not cry because I was smiling.”

You must log in or register to reply here.

12 new cars that will never go out of style

Jeep finally added a V8 to the Wrangler, and you can win one here