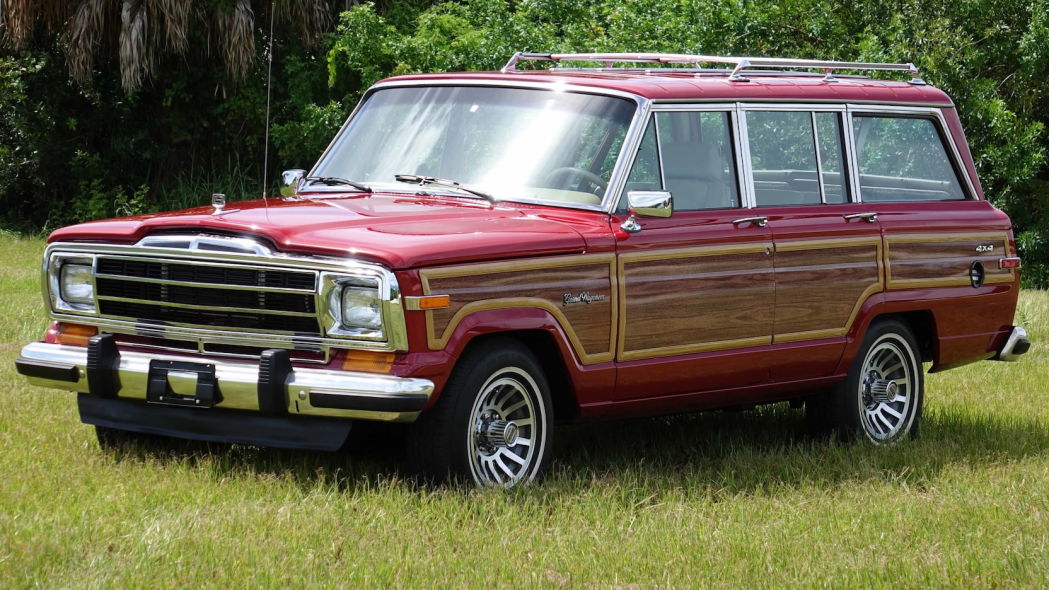 Auction house Mecum is preparing to sell a resto-modded 1989 Jeep Grand Wagoneer that puts a wood-paneled spin on Hellcatology. This hot-rodded 4x4 with supercar-like power is scheduled to cross the block on August 29.

Details about the build are few and far between. We don't know how the Hellcat engine ended up under the Grand Wagoneer's hood ornament, or when. Mecum's images suggest the swap was performed either by a professional or by a shade-tree mechanic with excellent skills because the engine bay is clean enough to eat off of. Dodge's supercharged, 6.2-liter V8 fits surprisingly well between the Wagoneer's fenders. It makes a whopping 707 horsepower, according to the listing, but what the rest of the driveline looks like is anyone's guess.

Close the hood, and you'd assume this Grand Wagoneer rumbled off the assembly line a couple of years ago. It's finished in Bright Red, it rides on 15-inch wheels wrapped by whitewall tires, and it has a tan interior. In other words, it looks just like the stately SUV that took thousands of families on vacation, sometimes hauling five people, their gear, a dog, and a kayak while towing a trailer. We think they'd have appreciated the extra power.

Had it not been Hellcat-swapped, this Grand Wagoneer would be powered by an AMC-designed, 5.9-liter V8 rated at 144 horsepower and a stout 280 pound-feet of torque. Chrysler already owned Jeep in 1989, but executives chose to keep AMC's venerable 360-cubic-inch eight in production until 1991 when the Wagoneer retired. It's celebrated as the original luxury SUV, and the original Grand Cherokee replaced it.

Mecum hasn't provided a pre-auction estimate, so it's too early to tell how much this Wagoneer will sell for. Don't expect to bag it for cheap, however. Wagoneer values skyrocketed during the 2010s, and insurer Hagerty values a 1989 model at $22,700 in good condition and $37,300 in excellent shape. We're guessing this rust-free, low-mileage example falls somewhere in between these two rungs, and that's before the Hellcat gets factored in.

If you get outbid, you'll need to either make the new owner an offer or source the parts required to build your own. Alternatively, Jeep offers a Hellcat-powered Grand Cherokee named Trackhawk, and sister company Dodge will soon put a 710-horsepower variant of the engine in the Durango for about six months.

What are your thoughts on this bad boy?
About author