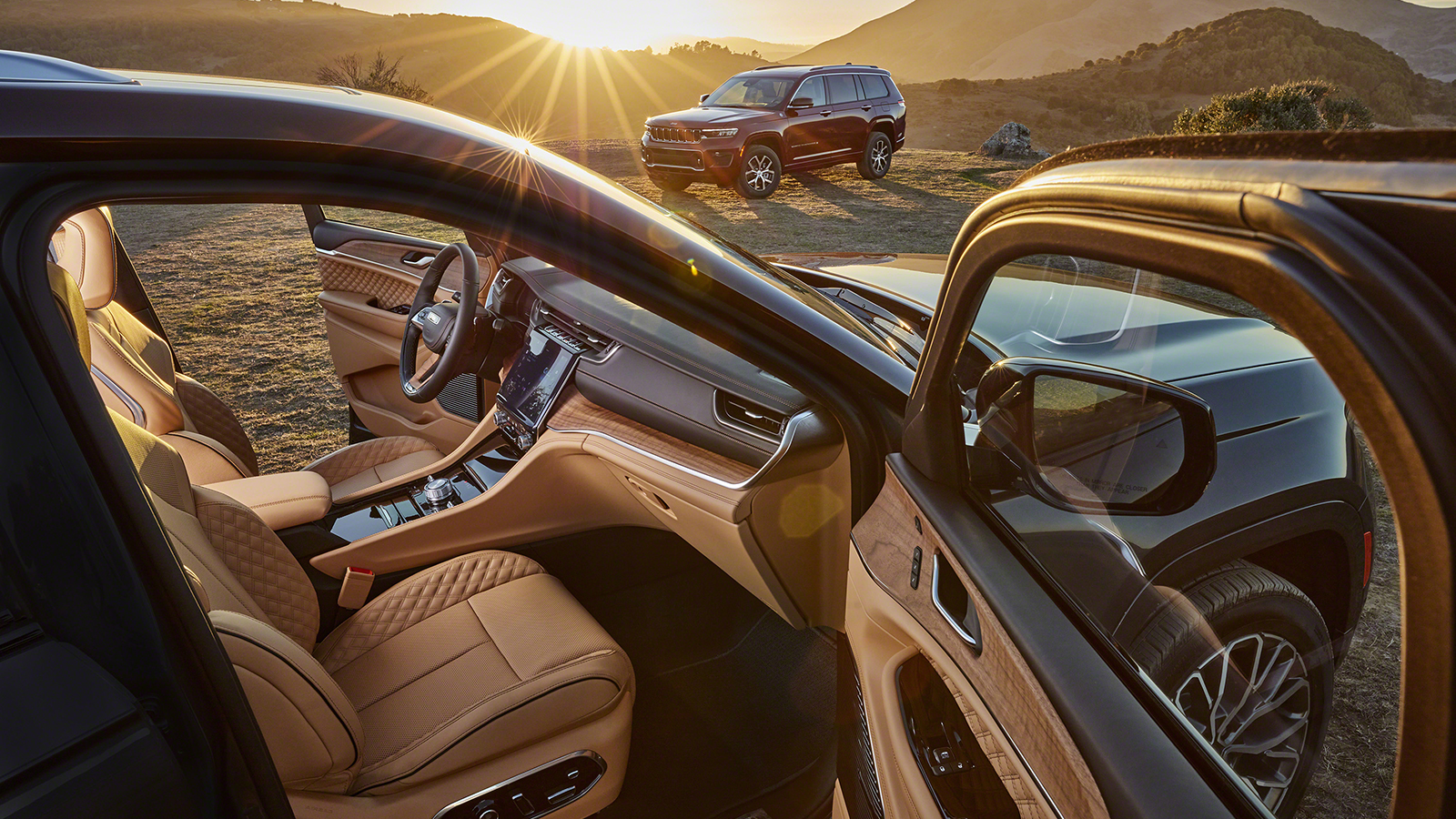 This is a big year for Jeep SUVs, and we mean that quite literally. Not only is it launching a full-size SUV in the form of the Wagoneer and Grand Wagoneer, but the Grand Cherokee midsize SUV is also completely redesigned and expanded, both in model offerings and physical size. That comes courtesy of the 2021 Jeep Grand Cherokee L, a lengthened version of the upcoming SUV that comes with the third row of seats, a first for the model.

This new Grand Cherokee L, and the two-row version that will follow later this year, are built on a completely new platform not used by any current product, nor the upcoming Wagoneer's full-size, truck-based platform. As with every Grand Cherokee before it, it has a unibody chassis. About 60% of it is composed of high-strength steel, and aluminum is used for the hood, hatch, shock towers, and front subframe, all of which help keep weight down.

Multi-link independent suspension is used at all four corners, and the adjustable air suspension is available. With the standard suspension, ground clearance is 8.5 inches with an approach, break-over, and departure angles of 20.6, 18.2, and 21.5 degrees, respectively. The air suspension's standard ride height is slightly lower at 8.3 inches, but it can be raised to 10.9 inches in the highest off-road mode. When raised to this height, the approach, break-over, and departure angles are 30.1, 22.6, and 23.6 degrees, respectively, for the more off-road friendly Overland trim. The top-level Summit trim has a slightly worse approach angle of 28.2 degrees because of a different front bumper. The air suspension has also been revised to lower more quickly by lowering both ends simultaneously, rather than one at a time.

Powering the Grand Cherokee L will be a choice of familiar engines. The base one is the 3.6-liter Pentastar V6 making 290 horsepower and 257 pound-feet of torque. The optional 5.7-liter V8 makes 357 horsepower and 390 pound-feet of torque. The towing capacity for the V6 is 6,200 pounds, and the V8 can handle 7,200 pounds. Both come with an eight-speed automatic. Three four-wheel-drive systems are available. The base version is a single-speed automatic system called Quadra-Trac I. Quadra-Trac II is also automatic, but it adds a low-range gear set. Quadra-Drive II adds an electronically controlled limited-slip rear differential. All the Grand Cherokee's four-wheel-drive systems can automatically disconnect the front axle when not needed to boost fuel economy. A 4xe hybrid model will be available later this year.

Inside, the big news is, of course, that the Grand Cherokee L has three rows of seats. The second row can be either a bench or as buckets for carrying either seven or six people. The dash design is quite similar to that of the Wagoneer, though with fewer screens. The remaining screens are still impressive, with a 10.25-inch instrument display and 10.1-inch infotainment screen as standard on all Grand Cherokee L models. A 10-inch head-up display is available as an option. The instrument panel is highly customizable and can display navigation, off-road data, and even the night vision camera feed. The infotainment system uses the latest UConnect 5 software. In addition to the metal dash accents, the Grand Cherokee L can be further spruced up with real wood and leather trim and a McIntosh sound system that features a menu with the brand's signature green and blue logo and VU needles.

The three-row Grand Cherokee L will enter production soon and be on sale in the second quarter of this year. The two-row and hybrid models will start production later this year, with sales starting soon after. Four trim levels are available for the Grand Cherokee L. Laredo, the base trim, followed by Limited, Overland, and Summit. Overland is available with an Off-Road Group package that adds Quadra-Drive II, skid plates, 18-inch wheels with all-season tires. Jeep made no mention of Trailhawk, SRT, or Trackhawk versions of the L. We suspect that the two-row Grand Cherokee, which will likely have a shorter wheelbase and better break-over angle capability, will be the only trim to get a Trailhawk trim. Jeep is also probably saving any SRT models for a year or two into the new Grand Cherokee's model cycle. Pricing hasn't been announced yet but should be revealed close to the on-sale date.

Let us hear your likes and dislikes on the brand new 2021 Jeep Grand Cherokee.
About author